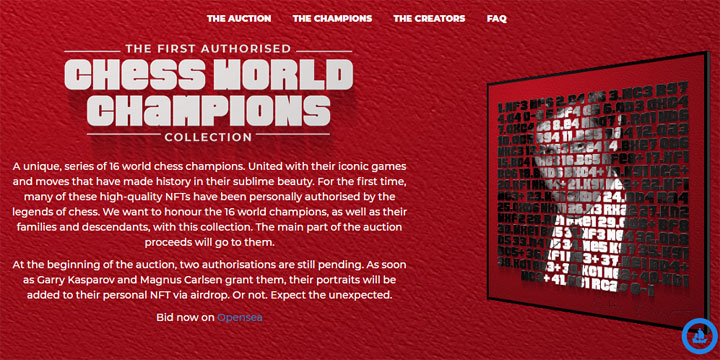 ChessBase is launching a unique NFT series of world chess champions, united with their iconic games and moves that have made history in their sublime beauty. For the first time, those high-quality NFTs have been personally authorised by the players themselves. We want to honour the world champions, as well as their families and descendants, with this collection. The main part of the auction proceeds will go to them.

The iconic games of the great minds of chess are dynamically presented in their international notation. A font specially designed for this series allows historical portraits and private photographs to merge with the moves. Behind the notation, the key position of the master’s game appears in 3D ray tracing technology from ChessBase. Alternating with this is an intense portrait of the world champion from his active time. You can read. You can see. You can feel. The moment of genius. Click to enlarge: 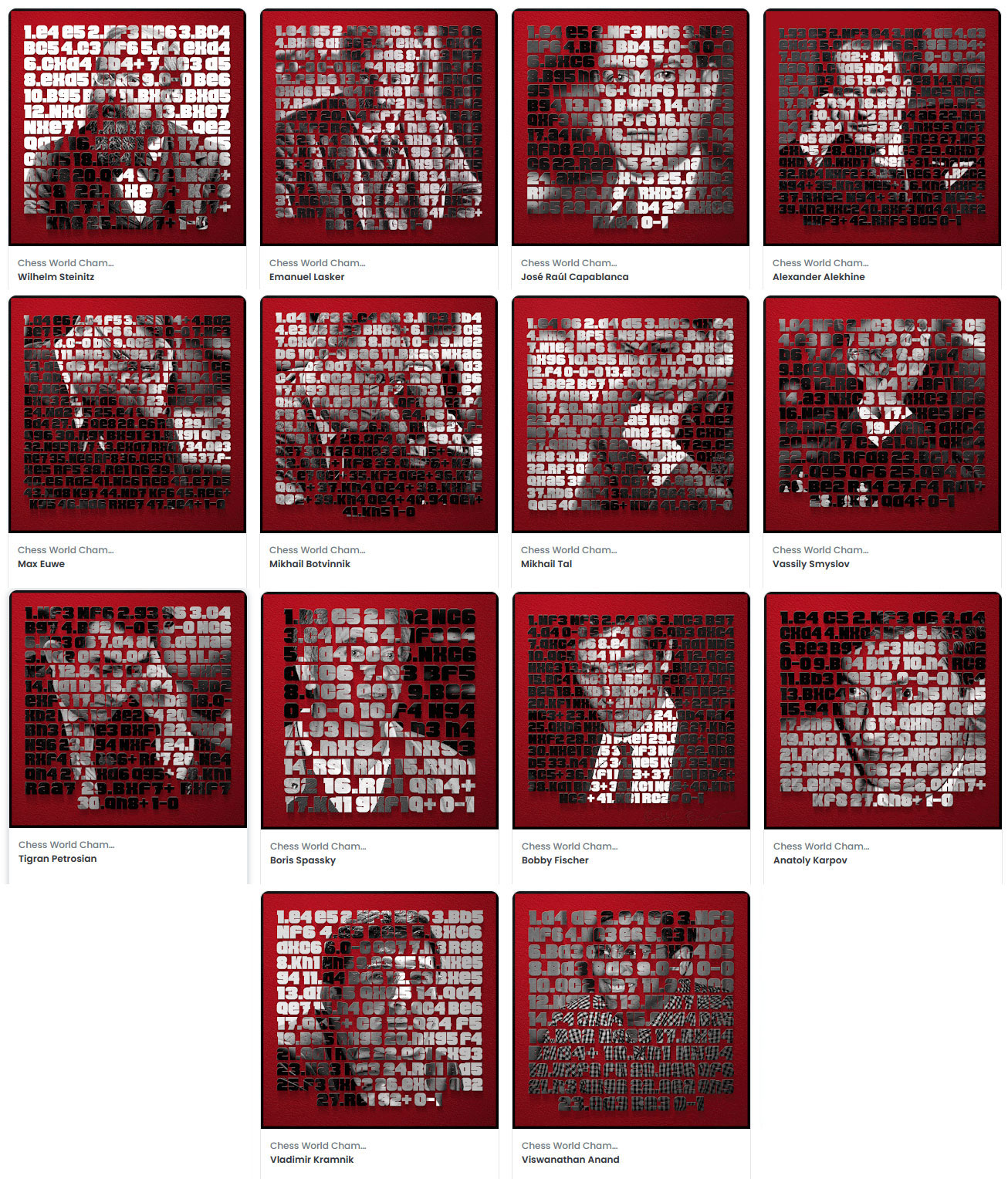 Fourteen artworks are offered. Each Champion’s artwork is a unique 1080 x 1080p GIF showing the notation of one of his most famous games, a photo of the Champion, and a ray traced 3D rendering of the key position. These are all authorized by the champion himself or his family.

Example of the Steinitz NFT, shown here in 600×600 animated GIF. The 16 NFT can be downloaded by anyone, and printed out in high quality for wall decoration.

There is only one NFT per artwork. Each artwork is offered only as a single piece. The auction takes place on opensea.io, a digital marketplace for NFTs. Payment is made with the cryptocurrency Etherium (ETH). To participate in the auction, you need an Ethereum wallet that you connect to OpenSea.

ChessBase is a German chess media company whose chess software is now the worldwide standard for world champions, professionals and ambitious amateurs.

According to Vishy Anand, ChessBase  “has changed the chess world forever”. The company operates an international chess server, a chess news platform and develops game-changing chess programs such as “Fritz”, as well as award-winning educational programs for children. With access to the world’s best players and coaches such as Garry Kasparov, Vishy Anand, Vladimir Kramnik, Daniel King, Maurice Ashley, Peter Heine Nielsen and many more, ChessBase offers a wide range of video training courses that help to raise the sport of chess to a new level.

ChessBase GmbH employs 30 permanent staff, including a large team of software developers and many freelancers all over the world.

The entire collection was designed by Carl Eriksson, a Swede who via art college in Wales, found the love of his life and his way to Hamburg, where he’s spent the last 15 years practising his craft on a number of exciting brands – including pretty much all the products in the ChessBase portfolio.