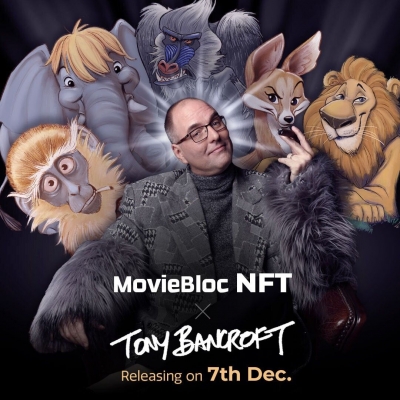 Disney animation veteran Tony Bancroft, co-director of Mulan and the creator of Pumbaa, the lovable warthog in The Lion King, is offering five new original drawings as collectibles to be auctioned on MovieBloc through December.

With over 30 years in the animation industry, Bancroft’s experience spans an array of hands-on creative roles in almost every facet of making animated films, videos, commercials, and short films. During his 12-year career with Disney Studios he helped create and animate Kronk, the dim-witted sidekick in The Emperor’s New Groove, Cogsworth the nervous clock from The Beauty and the Beast, and Iago the pestering parrot in Aladdin.

“NFTs that combine art and technology to create images usually unseen by fans in the production of an animated feature is exciting stuff!” shared Bancroft.

The new NFT artwork is now available on MovieBloc, and each NFT will be minted in two different versions: Standard Edition and Premium Edition with a visual effect. The NFTs will be built on Polygon blockchain, a popular environmentally friendly Ethereum scaling platform.

“I’m excited to present the NFTs from Tony Bancroft to the world,” commented MovieBloc CEO Chris Kang. “These NFTs will bring back good old memories to the viewers. More than that, we believe the NFT as the new art will empower the artists and creators, which is what MovieBloc has envisioned from the day one.”

Burbank-based Astro-Nomical Entertainment (A Tale Dark and Grimm), animation production and IP management company has entered into a strategic NFT partnership with MovieBloc, a blockchain based video streaming company, a PandoraTV company. It will focus on bringing Hollywood filmmakers and artists to the new NFT world for film art collectors.

“Starting with Tony, we already have a bunch of film makers and artist lined up to come on board and introduce a new world of NFT to the collectors all over the world,” noted Astro-Nomical’s Jay Ahn.

“I’m always looking for the new frontiers for entertainment and art. I’ve been watching the NFT market mature over the last 5 years, and it’s now evolved into being eco-friendly and supports creators utilizing the newest technology,” added Bancroft. “I love that I can express myself creatively and give my fans something new and exclusive.”

Millennial Millionaires Are The Most Bullish On Crypto, Survey Finds

To use rather than collect, the second coming of NFTs

XRP Has Broken Below Its Long Standing Support, What’s…